When your friends are family 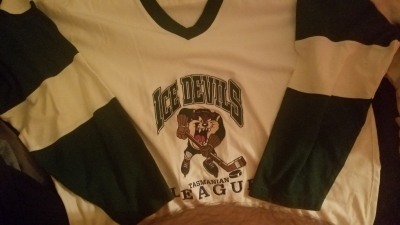 I grew up an hour outside of NYC, went to College in Bethlehem PA, and after college I lived in a place called Nyack NY 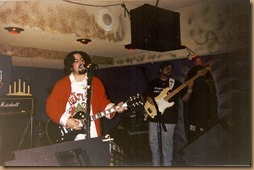 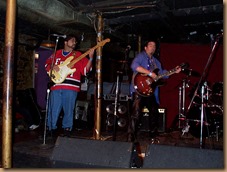 It was there I met a guy named Kenn Rowell when he was playing with a group called The Magnificent Pagan Gods. We became friends thru mutual friends and have stayed that way for almost 30 years now. After The Magnificent Pagan Gods Kenn formed a group called The Baghdaddios and that’s where our paths crossed musically(I’ll bet you didn’t know that I was a bass player) 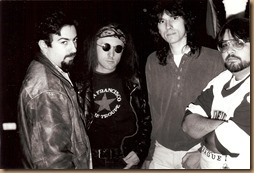 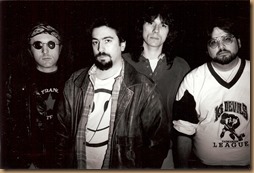 We played together for quite a while, thru a few drummers, a couple guitar players, parted ways briefly while The Baghdaddios ran thru a couple more bass players, and then back to me again.

From Kenny’s Castaways, to The Bank , to full 3 set nights around Nyack and Rockland County.. all the way down to the famed punk playground CBGB’s.

But this isn’t really about the music… it’s just the backdrop. 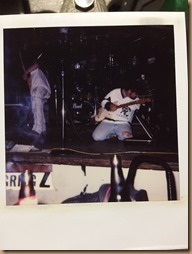 Kenn sent me a polaroid recently of us at what I’m pretty sure is CBGB’s. I mentioned that I sure missed the hockey jersey I was wearing in that pic. You see I bought this at the now defunct Warner Brothers Store.. This white and green jersey emblazoned with The Tasmanian Hockey Leagues’ Ice Devils logo and mascot.. Taz in full gear and skates

I wore that to every gig we did after I got it.

One night, after a long night of making music, drinking far too much and having WAYYY too much fun it disappeared.

I’ve always had my suspicions on what happened to it but that again is neither here nor there.

I turned 49 last week and yesterday a belated gift arrived from Kenn… inside was.. you guessed it… a white and green jersey emblazoned with The Tasmanian Hockey Leagues’ Ice Devils logo and mascot.

I’ve met a lot of people in my life, some come, most go on to follow their own paths but Kenn has always been there. When I was married, when my Dad died, when we just felt like chatting, whenever. We’ve collaborated musically since I moved to WI (check out Be Cool), stayed in touch and stayed the best of friends despite living 900 miles apart. 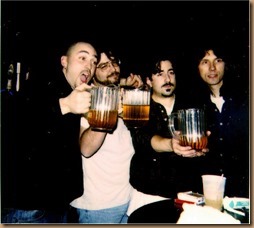 I’m proud of my time in The Baghdaddios, but even more proud that I met Kenn and continue to have him in my life

You can catch the Baghdaddios on:

Spotify (I play on Willie Horton Hears a Who)

The Baghdaddios are still a band, the hardest working band I‘ve ever worked with, indie to the death and aka The Band That WOULDN’T DIE! 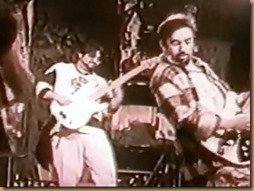 If I was still in NY I’d like to think I’d still be an active Baghdaddio, but right now I’m content to be part of that history, far away collaborator, and more importantly glad that Kenn is my friend, my brother, and my family